How long will it take to sell a home in Clark, NJ?

If you are a buyer or a seller interested in a home in Clark, New Jersey, please call Team Zuhl! We’re happy to help you in all of your real estate needs!

For more information on selling a home:

For more information on Clark and Clark Real Estate:

When you put your home on the market in Union, you should be ready to move quickly. Nearly all of Union County saw a marked decrease in the average Days on Market of a sold home in 2013 as compared to 2012, and the average home that sold in Union County in 2013 sold in fewer than 75 days as compared to an average of 88 days in 2012. Certainly, location within Union County had some effect on this as well, so here is the breakdown by town: 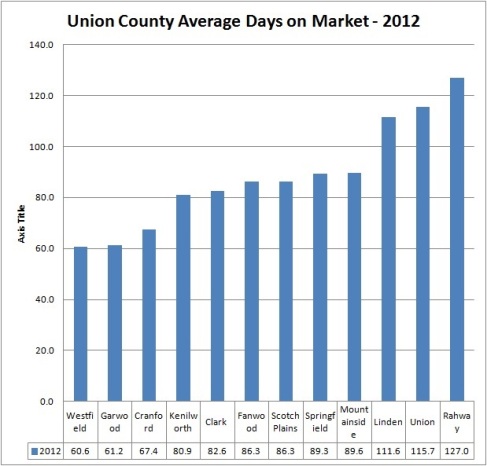 When we combine these two graphs, we see how each town’s Days On Market changed from 2012 to 2013.

Twons like Mountainside, Fanwood, Clark, Scotch Plains, and Rahway saw dramatic improvements in selling times whereas other towns like Westfield, Garwood, and Kenilworth only saw small improvements. Interesting to note that only Linden saw an actual increase in selling time from 2012 to 2013. We recently published the 2013 End of the Year Real Estate Market Report for Union County in which we compared the average sale prices of homes in Union County towns from 2012 with sale prices in 2013.

Looked at another way, below we have each town represented by a bar indicating the increase or decrease in selling time.

How does this affect you? Call Team Zuhl for a free Comparative Market Analysis and find out what your home is worth today!